I'm writing this post from 30,000 feet somewhere between Amsterdam and Nairobi.
I want to get my memories from today down before trying to get some sleep on this overnight flight. 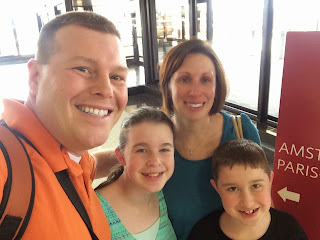 Lori and the kids dropped me off at the airport in Newark yesterday afternoon.  It was hard to say goodbye to them.  I'm going to miss them.

The flight from Newark to Amsterdam was uneventful. I sat next to a nice Nigerian woman.  She was surprised that I knew a bit about Nigeria, and that I have collaborated with several Nigerian teachers before.  I tried to sleep as much as possible on the flight, and got about 5 hours of very broken shut-eye, never more than 20 minutes at a time. The best pqrt of the flight was undoubtedly finding these homemade cookies that my daughter snuck into my bag. The note reads: 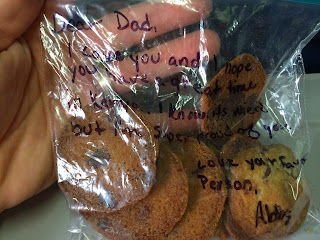 "Dear Dad,
I love you and I hope you have a great time in Kenya. I know this sounds weird, but I'm super proud of you.
Love, your favorite person,
Abby"


As we approached Schipol Airport, we flew over the tulip fields of Kukenhof.  That was quite a sight. My airplane window photo doesn't do it justice.

After getting off the plane, I made it through customs, put my carry-on luggage in a locker, and was on a train to Central Station in less than 45 minutes.  When I got into Amsterdam around 8:30, the city was still asleep.  Not much was open so I wandered around getting a feel for the layout and took a few pictures. Dam square was almost devoid of people, and took a panarama.


At 10AM I made my way to Yellow Bike Rental for a 2 hour small city bike tour that I had reserved. I enjoyed this a lot.  Bike tours are a great way to get an overview of a city in a short amount of time. Our guide Petra was a university student. She brought us to many of the most notable landmarks in the city, and in true university student fashion, told us all the cheapest places to buy beverages. I was the only American on the tour - others were from Australia, Albania, and I enjoyed some nice conversation with a woman from Hanoi, Vietnam. 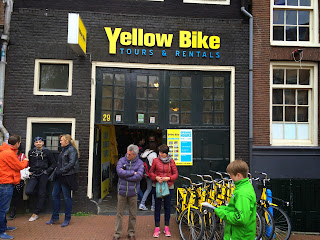 After the tour I stopped into a small cafe near a canal and had a small panini - mostly because I wanted to use their free wifi to send Skype messages to Lori and the kids wishing them a good morning. The mozerella, pesto, and fresh tomato sandwich was pretty good, though.
Around 1:45 I met up with my friend Marjolein Hoeksta who I met through the Microsoft Innovative Educator Expert program. We started the afternoon with a "100 highlights" canal cruise, which was relaxing and enjoyable. It was hard to stay quiet and listen to the narration because she and I had so much to catch up on. 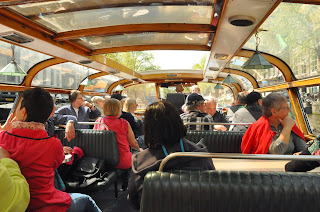 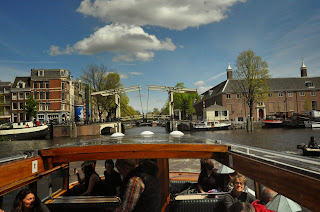 After the cruise we walked for a bit until we found a little fritte shop by a quiet canal.  We each had a cone of frittes (mine were with mayo), and chatted while our feet dangled over the canal wall.  It was an awesome "Amsterdam-ish" experience.

When the frittes were gone we set up my GoPro camera on a tripod and recorded a 10 minute video in which I asked her questions about Remembrance Day, Liberation Day, and the Netherlands, and she shared insights about her country.  Previously students in Tammy Lavoy and Tanya Cunningham's classes back home had come up with questions that they wanted to know, and we used those as a guide for the interview.  In addition, Marjolein has set up an amazing OneNote notebook with lots of information for them on their questions.  We're hoping that the notebook and video spark some further research by the kids.  The video will be posted on YouTube as soon as I upload it.  We were hoping to do this as a live Skype call, but we didn't find an appropriate place with good wifi.

We ended the afternoon by walking around the flower market a bit, and chatting over a cup of coffee at a cafe.  She walked me back to Central Station where I cought a train back to the airport. 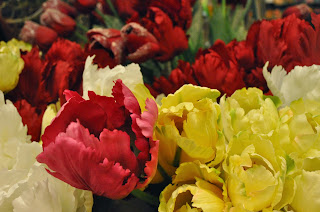 At 8PM an announcement came on over the airport speakers announcing that there would be a moment of silence in remembrance of soldiers that had died in and since World War II.  When the bugle played and the moment began, you could hear a pin drop in the airport. The reverance was tangible.  Marjolein had told me that even traffic on the streets and trains stop during this moment each year.

Soon afterwards I boarded the flight I'm on now to Nairobi. I thought I might get lucky and have two empty seats next to me for a minute, but the last two people who got on the plane sat next to me. Oh, well. They seem nice.  Not sure where they are from, but Spanish is their native language.

As I'm typing this I just got a Skype message from my wife (I paid for wifi during the flight so I could blog) telling me that Abby has a 102 fever and a bear got into our garbage. I'm feeling pretty bad about leaving her to hold down the fort for 2 weeks. Many of the things that I do wouldn't be possible if it weren't for her being supportive and holding things together on the back end. I don't know how, but I've got some making it up to her to attend to when I get home.

Well, I'm powering down for a while.  7 hours until I touch down in Kenya, and I plan to hit the ground running.  Shopping for school supplies tomorrow so that I have them for my visits to Cheery and Havilla later in the week.  As they say at Disney's Animal Kingdom in Florida, "Let the Adventure Begin!"

Posted by Michael Soskil at 2:32 PM