It's been too long since I last blogged.  I've got lots of excuses.  I've been busy training for my first half-marathon in Philadelphia this weekend.  I've been busy running an after-school club where students are free to explore and experiment with web2.0 technologies.  I've been busy developing a 3 credit course that begins in January entitled "Collaborating and Innovating in the Early 21st Century".  I've been busy helping my students be awesome.

It's that last one that lit a fire under me and forced me to put this post up today.  Because my students have been pretty awesome lately.  And it would be a shame to not share their awesomeness.  So, here are a few of the many things they've been up to lately.

For the presidential election, my fifth graders in collaboration with our other two fifth grade classes participated in a nationwide student-run election.  Results were reported on a collaborative Google Doc and tabulated using electoral votes.  In all the years I've been teaching students about the Electoral College, never have they understood it more than this year when it was directly relevant to them.

Students created voter registration cards, researched candidates' positions on the issues, ran the polling place, and calculated our schools' results to report.  I thouroughly enjoyed sitting back and watching them participate and learn.  Below are some pictures from the event.


Also, our fifth graders are running a food drive during the months of November and December to help the local food pantries.  In order to promote the food drive, my class organized an advertising campaign.  They split themselves into three groups and decided that one group would be in charge of producing a 30 second video ad, one group would transform a hallway bulletin board into a billboard, and one group would create posters to hang in the hallways.  I was blown away by their work. 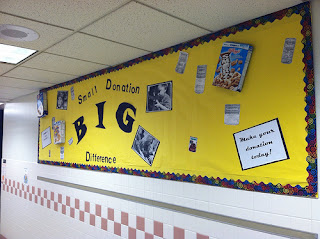 The posters should be finished by the end of today, but they aren't ready for me to share yet.

I'm really proud of the work my students are doing.  I'm proud because it's good work, but also because they are making a difference in the community and learning how rewarding that can be.  And they have ownership because it's their work.  They wrote, produced, and starred in the video (I was the camera person because their designated camera person was absent).  They designed and created the bulletin board with very little help from me (I helped them hang the background paper).

This is what learning should look like.  Students in charge.  Real problems being solved.  Teachers supporting and not leading.  Evaluation based on "How much of a difference did we make?" rather than "What was my test score?"

When students are being awesome, I am reminded why I love my job.
Posted by Michael Soskil at 6:06 AM